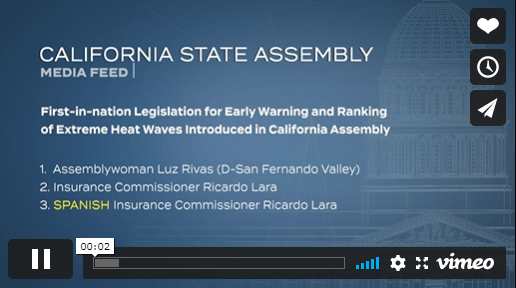 California has experienced record-breaking heat waves in recent years that are projected to increase in frequency and severity. In 2020, emergency room visits increased by 10 times the normal number during record-breaking heat as high as 121 degrees in Los Angeles County. California’s 2021 heat wave broke records across the state, with Sacramento topping out at 109 degrees and the Coachella Valley having its hottest year ever with temperatures reaching 123 degrees. Temperatures climbed to near 90 degrees in Los Angeles during Super Bowl LVI, when many people are unprepared to experience high heat in mid-February.

The idea of ranking heat waves was first proposed by Commissioner Lara and the California Climate Insurance Working Group, which issued a new report in 2021 aimed at protecting Californians who are more vulnerable to the impacts of climate change. According to the newly introduced bill, “[h]eat waves and extreme heat are responsible for more deaths than all other extreme weather events, and disproportionately impact communities of color, persons with disabilities, seniors, and low-income communities.”

“Extreme heat waves are the deadliest climate threat that California is facing today. With more heat waves forecast in the years ahead, it is essential to public health and safety that we help Californians prepare, especially our most vulnerable,” said Insurance Commissioner Ricardo Lara, who was a member of the Climate Insurance Working Group. “Giving advance warning and ranking these heat waves help us confront the growing threat of extreme heat with actions that people and communities can take to stay safe and healthy.”

“California’s climate has become increasingly erratic – we must take bold action to protect our residents from climate crises like extreme heat, which has intensified in both severity and occurrence,” said Assemblywoman Luz Rivas (D-Los Angeles), Chair of the Assembly Natural Resources Committee. “For years, I have elevated extreme heat policy issues because we cannot keep leaving our most vulnerable residents exposed to dangerous heat waves without proper warning or preparation. I’m excited to work with Commissioner Ricardo Lara and my colleague Eduardo Garcia, both of whom are environmental leaders and champions for Californians disproportionately suffering from the effects of rising temperatures.”

“Extreme heat is a matter of life and death in my district and throughout California. We can no longer ignore this escalating climate consequence as it jeopardizes health and safety conditions for residents,” said Assemblymember Eduardo Garcia (D-Coachella), Chair of the Assembly Utilities and Energy Committee. “Assemblymember Luz Rivas, Insurance Commissioner Lara, and I are taking legislative action and enlisting support to better prepare and protect our most vulnerable communities with this first-in-the-nation, lifesaving heat ranking system.”

"When it’s 110 and above in the San Fernando Valley, it's the people with medical issues who are homebound without shade, sufficient insulation, AC, or stable power supplies that I worry most about. This legislation is needed to notify everyone of what is coming and mobilize resources to those who need it," said Senator Henry Stern (D-Los Angeles), Chair of the Senate Natural Resources and Water Committee and Joint Legislative Committee on Emergency Management.

“We are no longer in the business of climate change as a distant problem to deal with in the future, we are seeing the devastating impacts of a changed climate today, especially here in California,” said Senate Majority Leader Emeritus Bob Hertzberg (D-Van Nuys). “Extreme heat is killing Californians, disproportionately impacting communities of color and our most vulnerable. This heat ranking system is vital to protecting our state and will save countless lives.”

AB 2238 directs the California Environmental Protection Agency (Cal EPA) to work in coordination with the California Department of Insurance and the Governor’s Office of Planning and Research (OPR) to create and implement a statewide extreme heat ranking system. Heat-wave ranking would include the projected health impact and meteorological data, such as maximum and minimum temperatures, as well as how long a heat wave is anticipated to persist.

The Integrated Climate Adaptation and Resiliency at OPR would undertake a communications strategy and planning guidance for local communities in consultation with a variety of local stakeholders. This bill also directs the Department of Insurance to study the insured and uninsured costs related to past extreme heat waves in order to identify “insurance gaps” of uncovered costs and promote more effective risk communication and planning.

An early warning ranking system for heat waves would further empower local governments and communities to plan in advance and implement specific policies to reduce the impacts from the harshest heat waves, especially on vulnerable communities and those more susceptible to extreme heat.

What supporters are saying about AB 2238

“Communities in Pacoima and the Greater San Fernando Valley are at unique risk from extreme heat weather-events because of a lack of access to cooling and shade. I am grateful that Assemblymembers Rivas and Garcia are working together with Insurance Commissioner Lara to ensure that we provide advance warning and preparation for deadly heat waves that are all too common in the Valley.”

”Thanks to climate change, heat waves are getting worse, and redlining left communities of color with the fewest resources to cope – too often lacking trees, green spaces or access to adequate air conditioning. Ranking heat waves will help us identify extreme heat as the life-threatening emergency it is and give communities the information needed to stay safe, healthy and protected."

—Sona Mohnot, Associate Director of Climate Equity at Greenlining Institute and a member of the Climate Insurance Working Group

“Categorizing heat events based on human health is a powerful new tool to augment existing heat warning systems. The new approach proposed in this bill will result in lifesaving warnings that will protect Californians who are increasingly facing the threats of extreme heat. The Adrienne Arsht-Rockefeller Foundation Resilience Center is proud to partner with Commissioner Lara, Assemblymembers Rivas and Garcia. We applaud this crucial legislation.”

"TreePeople’s research and our participation in the 26th United Nations Climate Change Conference of Parties held in Glasgow, Scotland reaffirmed what the communities we work with every day already know: extreme heat is the pressing climate threat to our most vulnerable communities. We wholeheartedly support this legislation because it will not only save lives and reduce heat-related hospitalizations, but it will prepare and protect heat-vulnerable communities, low-tree canopy communities, and communities of color.”

“As extreme heat becomes an increasingly urgent concern for low-income individuals, families and communities across Los Angeles County, NLSLA is encouraged by Assemblymember Luz Rivas’ continued efforts to address and mitigate the disproportionate impact of a warming planet on the vulnerable communities we serve.”

“Improved warning systems are essential to reduce the risks of extreme heat and will be a great asset to our work. People can’t protect themselves if they don’t know they are at risk. Climate Resolve congratulates Commissioner Lara, Assemblymember Rivas and Assemblymember Garcia for this important initiative that will save lives from the growing threat of extreme heat.“

“We applaud the state for concretely communicating the dangers of extreme heat. More than 2 million people in greater L.A. are highly vulnerable to rising temperatures, but local governments can't prepare for climate impacts unless they have the data to buttress their resilience planning and budgeting."