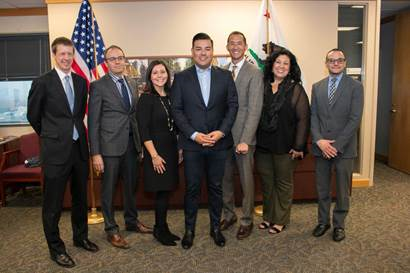 SACRAMENTO, Calif. — Insurance Commissioner Ricardo Lara announced new members of his executive team, including the first Latina chief deputy in the history of the Department of Insurance.

“I am proud of naming our first Latina chief deputy in the Department’s history because I believe all levels of government should reflect California’s diverse communities,” said Commissioner Lara. “Our team will embrace innovation, with the first in the nation executive-level position engaging the insurance industry in the fight against climate change. Protecting California’s consumers demands we confront the growing threats from wildfires, fraud, and the rising cost of health care in partnership with the Governor and Legislature.”

Michael Peterson will serve as Deputy Commissioner for Climate and Sustainability, the nation’s first executive-level position focused on engaging the insurance industry in the fight against climate change. He previously served as legislative consultant to Senator Lara, focusing on climate change, natural resources and energy policy, and as a consultant for the California State Senate Committee on Natural Resources and Water.

Director of Community Outreach Julia Juarez will lead the Department’s engagement with California communities. She previously served as District Director for Senator Lara when he represented the 33rd Senate District.

Special Assistant David Green joins the Department after serving in the Capitol office of Senator Lara.

Commissioner Lara is the eighth Insurance Commissioner of California since voters created the position in 1988, and the first openly LGBTQ person to be elected to statewide office in California.

The more than 1,300 employees of the Department of Insurance work to protect Californians from unfair insurance practices and fraud, preserve communities and businesses, and prevent losses through innovative approaches. Learn more at insurance.ca.gov.